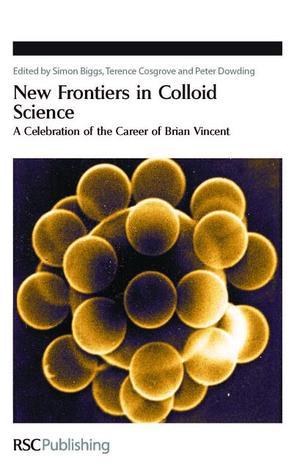 Brian Vincent retired from the position of Leverhulme Professor of Physical Chemistry at the University of Bristol at the end of 2007 after a long and distinguished career which started as a chemistry undergraduate in Bristol in 1961. After obtaining a 1st class honours degree in Chemistry and an MSc in Surface Chemistry and Colloids and a PhD, Brian then moved to Wageningen to work in Hans Lyklemas laboratory on a Royal Society Fellowship. This was to be the start of a lifelong friendship and scientific collaboration with the Colloid and Physical Chemistry Group there.

After returning to the UK in 1969, Brian had a succession of top posts and appointments culminating in 1993 when he became the 5th Leverhulme Professor in Physical Chemistry. In 1994, together with Dr Jim Goodwin, Brian founded the very successful Bristol Colloid Centre, an organisation which carries out short-term research and consultancy work for industry.

Brian has received many honours including the SCI Founders Lecture and Award, the SCI Distinguished Service Award, the RSC award in Surface and Colloid Chemistry and the Rehbinder Lecture and Medal (Moscow). He has had numerous invitations to give lectures throughout the world and has published over 250 papers, articles, books and patents during his career. He has also been very active at the academic /industry interface and has been a consultant for many of the leading companies that use colloid technology worldwide.

This unique book is effectively a compendium of Brians research, complemented by contributions on current topics in colloids by some of the leading scientists in the field. It provides an overview of the broad spectrum of colloid and interface science in which Brian has been a research pioneer for many years. The contributors to this symposium volume comprise a selection of Brians past students and postdocs who have themselves pursued academic careers and other colleagues with whom he has worked extensively, all of whom are of international standing in colloid science and as such make this book an invaluable reference tool.

The book backs up a meeting organised jointly by the RSC Colloid and Interface Science Group and the SCI Colloid & Surface Science Group and covers topics such as: The Adsorption of Small, Negative Particles onto Large Positive Particles Polymer Chemistry, Hypervelocity Physics and the CASSINI Space Mission The BV Droplets Downunder: From Model Emulsions to Drug Delivery Polymers and Surfactants at Interfaces Controlled Release as Desorption from Porous Polymeric Systems Characterisation and Application of Colloidal Micorogels Surface Modification The range of the subject material highlights Brians own very broad interests in colloid science- it also reflects his long-standing interest in both the academic fundamentals as well as practical applications of the subject.

The volume is dedicated to Brian in recognition of his considerable contribution to the world of colloid science and to the guidance and inspiration he has given to many future generations of colloid scientists. However, the book is not just reflective, but provides insight into new areas in which colloid science is being applied. It has specific appeal to both colloid scientists in academia and industry who will find this book fascinating as well as an indispensable reference tool.