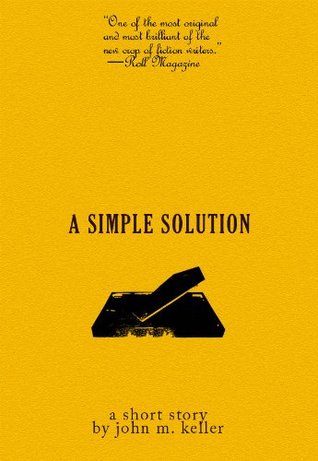 From John M. Kellers 2012 collection A BALD MAN WITH NO HAIR:After the same thing happens over and over again―despite thinking shes already discovered at least one simple solution or other―Cynthia finds herself in a weekly support group for women in love with gay men.

Listening to the other women talk about their individualized problems, Cynthia finds herself wanting to scream. Maybe she will.About A BALD MAN WITH NO HAIR AND OTHER STORIES:Poised amid a dazzling array of locales and predicaments, the characters in John M.

Keller’s incisive, original stories become as real and as vivid as the places they inhabit. In “People Like Me Better Because I Like Guacamole,” published in Glimmer Train, a Russian grocery store employee with a “box full of discarded dreams” heads to glacial southern Chile to try his hand at advertising copy, just after a gypsy predicts he’ll die along the journey. In the title story, the life of a Mexican man with a rare sleep disorder changes irrevocably as he seeks to unravel the mystery of who shaved his head while he was sleeping.

Keller captures the humor of the peculiar and the pedestrian, and his rich, searing descriptions and labyrinthine plots charge these twelve stories with an electric and unequivocally human pulse. This is the first collection of stories from a bold new voice.

Comments
Comments for "A Simple Solution":